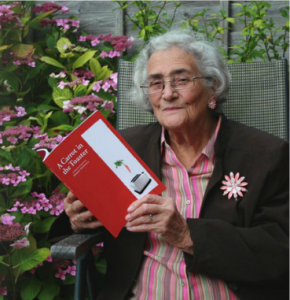 Marion Sharville, a published author of children’s books at 90

People self-publish their work for a host of different reasons, and I’ve discovered that there’s often a touching tale behind the printed story.  As a boy, Tim Sharville loved it when it his mum, Marion, read to him. Only the imaginative stories she told him weren’t from the pages of bought children’s books; she had written them all herself. It was her dream to one day turn her hobby into a profession, but her family came first.  Sadly, Tim’s father passed away when he was nine, leaving Marion to raise him and his six older siblings alone. This understandably left Marion with little time to pursue a writing career.

Three years ago, with Marion approaching her ninetieth year, Tim decided to help his mum finally see her work in print. A web designer and cartoonist by trade, he set to work at illustrating the stories that he and his family held so dear. Picklemouse Pumpkin, the story of a lonely mouse whose life is transformed when his great uncle brings home mice from all around the world, was published in time for Marion’s 90th birthday celebrations. The Incredible Creatures of the Secret Ark, another children’s tale about a group of alternative animals surviving the Great Flood, and a novel, Daisy Chain, soon followed. I spoke to Tim about how he set about self-publishing the trio of books, and how his mum feels about finally becoming a published author at 90. 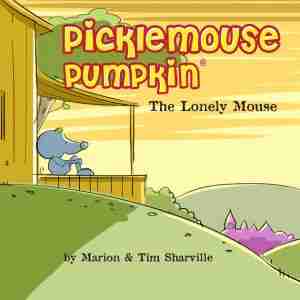 What made you decide to self-publish? I did it to say thank you to my mum for all the wonderful stories that she’s written for us over the years. I wanted her to be able to give a copy of her book to friends and family and really feel proud. I was also attracted by the creative control that self-publishing gives you.

Which self-publishing company did you use? CreateSpace, which is part of Amazon. The illustrations for the first book took me about a year, but after that it was remarkably quick. You upload everything onto the CreateSpace site free of charge and once you’ve approved everything, it’s made available on Amazon to purchase. I chose a print on demand service, which meant that there was no cost to me until I had sold a book. When one is sold through Amazon, I still make a small profit.

Did you get someone to proofread the books? Yes. Even though the word count for the children’s books is relatively small, I wouldn’t have published them without getting someone to check them first. I also had to have some of the terms that Mum used modernised as she was writing these stories up to 60 years ago. Some language has changed since then!

How did you market the books? I promoted them via social media to start with. Meanwhile, Mum managed to get them into a couple of libraries and she sold signed copies at the day care centre she goes to. A friend of mine who works in the publishing industry has offered to pass Picklemouse Pumpkin to the department which commissions children’s books. I like the fact that if it does take off and we get a publishing deal, we are not tied to Amazon as such, we own the work.

What tips would you give to other self-publishers? For any story, especially children’s ones, it’s important to have clear beginning, middle and end. If you’re using illustrations, make sure that they are up to scratch and don’t scrimp on getting your work professionally edited. Other than that, I’d tell people to dive in. Ten years ago, it would have cost between £800 and £2000 to have a book printed. That’s not the case anymore so give it a try. You really have nothing to lose anymore.

What inspires you?  I’ve always enjoyed drawing cartoons and have worked as a commercial cartoonist for years. With Mum’s stories, I had a clear vision of what I wanted to draw because I knew them so well. In fact, I started illustrating The Incredible Creatures of the Secret Ark some 20 years ago using water colours. Her good writing inspired me to do that.

What’s been the highlight of your self-publishing career so far? Seeing my mum close to tears when she saw her first book in print. She was over the moon with it, and she’s proved that it’s never too late. If the books makes us a little bit of money on top of that, it will be an added bonus. We’ve also received some lovely reviews from our readers. 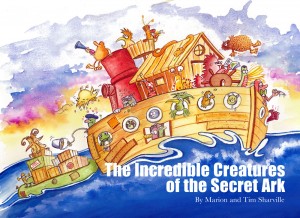 You can buy Marion Sharville’s books online at Amazon or get signed copies from Tim Sharville’s website.