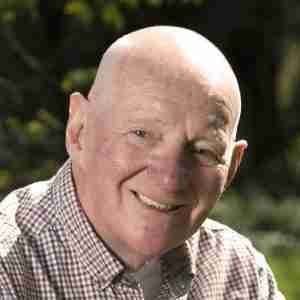 When Tom Mackenzie self-published a memoir, focusing some of it on his extraordinary early life as Britain’s last foundling, his son Grant, 26, advised him that he needed to ‘put himself about a bit’ in order to get noticed. So Tom, 74, duly went about setting up a Twitter account and starting a blog. Although sales of his book were crushingly slow, the blog led to a regular gig writing a column for his local newspaper, The Plymouth Herald, and – after two years of diligently sending his words into the ether – a book deal with a major publishing house.

It’s no surprise that Tom’s story was eventually picked up. The Foundling Hospital opened in 1741 to care for abandoned babies. In most cases the children who grew up in the hospital were born out of wedlock, a scandalous occurrence in the Georgian and Victorian eras. Times had barely changed in that regard by the time Tom came into the world in 1939, and his unmarried mum, Jean, made the heartbreaking decision to hand Tom over to the hospital. Tom’s childhood was intermittently spent with foster carers, but it was mainly a lonely, loveless existence. In his memoir, he recalls the horrific cruelty he endured at the hospital.  Tom left the institution for good at 15 and, after hearing snatches of conversations about his real mum, was able to track her down in Edinburgh. Jean welcomed her long-lost son back into her life and she and her solicitor husband Duncan officially adopted Tom just before his 21st birthday. Jean has since passed away, and it wasn’t until he reached his 60s that Tom decided to delve into his past and write his story. Following its publication in March this year, The Last Foundling (Pan Macmillan, £7.99), has become one of WH Smith’s bestselling books. I spoke to Tom in the wake of his well deserved success.

‘I felt that I should write up my unusual life story’ 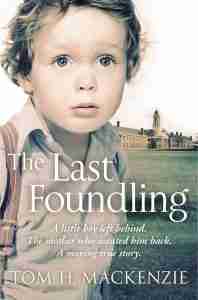 Why did you decide to write your memoir? I’ve always felt that I’ve had a very unusual life in one way or another. There’s been so many happenings of a dramatic kind that when I got into my 60s, I felt that I should get my life story written up. My three grown up kids thought that they knew all about me, but so much of what is in the memoir came as a revelation to them. I was aware that future generations might be interested to read about what their great-grandfather said about life 150 years ago.

What was your self-publishing experience like? It was disappointing. Grant published my full autobiography as a paperback in 2012 using a print-on-demand service and also as a Kindle ebook. The problem was that in order to sell the paperback on Amazon and break even, the RRP had to be set well above what anyone would be willing to pay for a book published by a first-time author. Ebook sales gained no traction either, even though we set the price at 99p for a long time. The odds of making a breakthrough on Amazon were not in our favour!

‘I know how hard it is to find a publisher’

That’s such a shame. How did your book eventually get picked up by Pan Macmillan? I think it came down to a bit of luck and me raising my profile through blogging . Someone from a major publishing firm got in touch with me after spotting my blog while researching the Foundling Hospital. They contacted me in October 2012 and went on to offer me a deal. I was all set to sign when my son Grant said that we should attend the London Book Fair and see if any another publishing houses were interested in the story. That led to a bidding war between four houses and Pan Macmillan offered me the best deal. I often think how none of this would have happened if I hadn’t written my blog. It’s also entirely possible that had I gone to another children’s home that wasn’t so famous, I could have written about the exact same experiences and not got a book deal – that’s where the luck comes in. I know how hard it is to find a publisher. To go from being locked out of that for so long to being chased by four publishing houses was incredible.

Did your editors at Pan Macmillan change the book much? Yes, in so much as they wanted me to expand on my life before 20. I had written up my entire life story so I had paced myself as I hadn’t wanted to take up half the book writing about the first 30 years of my life when I had another 40 to go. The editors took the first nine chapters of the memoir, which covered my early life, and asked me to write around 40,000 extra words. They also asked me to change the style from third person to first person. I’d been reluctant to do this because it seemed a bit bombastic and I also felt that writing in third person would allow me to talk about things that I wasn’t witness to. However, my editors explained that changing it to first person would help my readers put themselves into my shoes. They gave me advice on things that I could expand on and tweaked the copy a little, but 90% of the words in the book are mine.

‘Make room for writing your memoir each day’

What advice would you give to someone planning to pen a memoir? You need to be disciplined and make room for writing each day. I gave up Corrie! 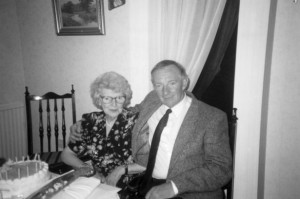 Tom with his mum on her 80th birthday

Finally, was it hard for you to go over aspects of your childhood in such detail? No, it was actually cathartic. I hadn’t thought about those days so intensely for a very long time – being involved in business and getting married four times had kept me busy – but I found that I was able to pull out names and experiences that had disappeared into the card index of the brain. Many children who went through what I did were traumatised for life. Many didn’t find their real parents and if they did it didn’t work out so well.

To locate his book on Amazon

A recent article on Tom Mackenzie, which appeared in The Guardian