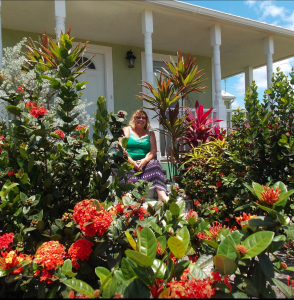 Self-publishing suits her. Elaine Spires outside her home in Antigua

When reading the author bio in a book, there is a certain much used phrase which is always liable to send me a little green with envy. It’s the one that begins: ‘the author divides their time between…’ What follows is usually a perfect juxtaposition of idyllic lifestyles, with the writer hot-footing it between their city pad and their country retreat/sunny hideaway. It’s not too much of an assumption to say that this is the dream of many writers, and author Elaine Spires, who has embraced self-publishing, is living it. She resides in Essex, but jets off to her home on the Caribbean island of Antigua whenever she fancies topping up her tan and her word count. I chatted to Elaine about how her place in the sun has influenced her work.

Tell me about your books. I find it very hard to put myself in a genre. There is romance in the books, plus comedy and a little bit of pathos. I’m hesitant to describe them as chick lit because men have appreciated them. Some of the characters pop up more than once in the books. My first novel, What’s Eating Me, about an overweight woman who stars in a reality TV show, started life as a play, which was performed on the London and Edinburgh fringes. The characters were very close to my heart and I didn’t want to let them go, so I decided to write a book and really enjoyed the process. Singles’ Holiday and Sweet Lady also came from plays. Now Singles’ Holiday is returning to its original format. I’ve been invited to make a pilot episode for a TV show and we currently have one definite date to perform it at an Essex theatre. 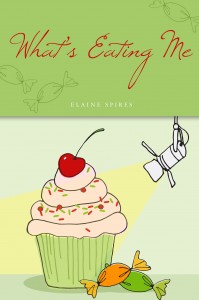 What were you doing before you started writing novels? My background is mainly in education and tourism, but I’ve also been acting on and off for 20 years. I’ve done two stints in the West End in The Ladykillers, and I’ve appeared in the odd commercial. I’m resting at the moment, but I live in hope!

What made you decide to go down the self-publishing route? I initially tried two publishing houses with What’s Eating Me, but they rejected it. I believed in the book and decided that I could either spend 10 years receiving rejection slips, or I could publish my work myself. In the last five or six years, self-publishing has ceased to be the ugly sister of the publishing world.

Which self-publishing company did you use? I used Lulu, but for my latest novel, Singles and Spice, I’m publishing completely on my own. I’ve found a printing firm that will print 200 copies at a time and I’m selling them on my website and via Amazon. I decided to do this because when people were ordering my books from Amazon via Lulu, I was only receiving about 17 pence per copy. It was more if people ordered directly through Lulu, but Amazon is the site that most people use to shop for books.

‘I hired a publicist to help market my novels’ 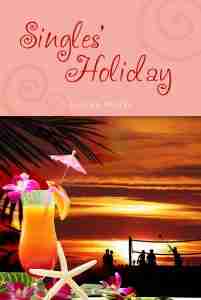 Did you use any other professional services for your books? I hired a wonderful artist called Lisa Moreno to design my book covers and website. I also hired a publicist to help with the marketing side. She’s organised a blog tour for me and she’s also good on social media.

How did you come to buy a home on Antigua? I worked as a tour leader for 12 years, taking groups of singles on holidays all over the world. I was sent to Antigua on many occasions and it was love at first sight. I’ve always had a thing for islands.

Have your travels influenced your work? Yes, they’ve influenced my writing a lot. Singles’ Holiday comes from my days as a tour operator. The job gave me an insight into the different sides of human nature. Some people were using the holiday as a kind of dating agency, others were having time out from their actual relationships.

‘The Golden Girls of the Caribbean’

Does spending time on a sun-soaked island help to get the creative juices flowing? Yes, my little house is my own piece of paradise and it’s very conducive to creativity because it’s so peaceful and quiet. Singles’ Holiday and Sweet Lady are set on the island, and I’ve also developed a writing career over there. I wrote a TV series called Paradise View, which was shown on Antigua TV. When I last left the island, the people at the check-in desk were asking when they would get to see more. I’m now working on another show called Maisie and Em, which I describe as Golden Girls set in the Caribbean.

What advice would you give to others hoping to self-publish? Just do it! Have faith in your writing because it’s probably much better than you think it is. Nothing beats the feeling of holding your own book in your hand. 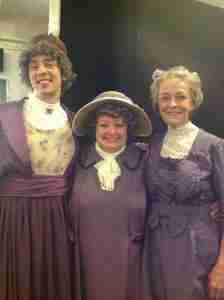 Elaine in the Ladykillers