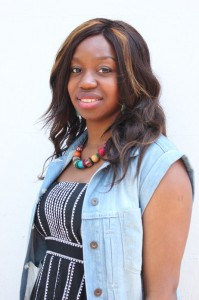 A. Bello describes how she went from being a 12-year-old comic fan with a cracking idea for a children’s book to becoming a successful self-published author.

When I was a kid, the female characters in children’s books often had to wait patiently for Prince Charming to show up and rescue them. These days, they are more likely to be fighting their own battles – and winning. A. Bello got the idea for her debut children’s book, Emily Knight, I Am…when she was just 12-years-old. Instead of fantasising about knights in shining armour, the author, whose first name is Abiola, was hooked on Japanese comics and anime. Her favourite characters invariably had supernatural powers, creating fireballs, possessing super strength and flying. It was more than a decade before Abiola, now 25, felt ready to publish her children’s book, and it has been greeted with rave reviews. So much so that the author now has an agent and interest from some major publishing houses. But Abiola, who also works as a street dancer and dance teacher, has achieved this through immense hard work, combined with a willingness to take a few risks. She funded her own launch party and persuaded illustrator Giles Greenfield, who produced the cover for Harry Potter and the Goblet of Fire, to do her own cover art. I chatted to Abiola about how all her hard graft could finally be paying off…

‘Emily is blessed with super powers’

Tell me about your book. It follows the fortunes of a 13-year-old girl called Emily, whose father is a legendary warrior. Emily is blessed with superpowers too and has extraordinary strength. After her mother gets cancer and her brother runs away, Emily is sent to live with her godparents. She struggles to control her powers and exploits her fame, which she has from being her father’s daughter. But she has to step up when her brother Lox falls in with the evil Neci.

How did you go from the initial idea that you had as a child, to getting the book published as an adult? I was studying creative writing at the University of Roehampton and showed it to one of my teachers. She really helped me to mould my young heroine. Emily was initially white because I wanted to avoid the book falling into the category of ‘black writing’. However, some other diverse characters feature in the book. My teacher advised me that if I was going to break convention, I might as well do it properly! After changing Emily’s appearance and working on the book some more, I did get some initial interest from agents, but then decided to self-publish.

‘I dreamt that Giles Greenfield illustrated my book’

What was your self-publishing experience like? I found that there was a lot to learn. I used a publishing company in America, and an editor I knew kindly offered to work on the book free of charge.

A. Bello’s amazing cover, which was designed by Harry Potter illustrator, Giles Greenfield

How did you persuade Giles Greenfield to illustrate your cover? I initially had an artist friend doing this for me, but I found it difficult to translate what was in my head. Then I had a dream that I had asked Giles to do the cover and he had said yes! I found his website, sent him a message and a short while later I received an email from him saying, ‘yes, let’s do it!’ He also gave me lots of valuable advice on the whole publishing process.

What happened next? I organised my own launch party and arranged a few interviews, but it wasn’t until I hired a PR firm called Literally Public Relations that things started to pick up for me. Helen, who runs it, organised for my book to be reviewed, and had me appearing in blogs. She also encouraged me to attend the The London Book Fair, which led to me signing with an literary agency called Raimondi & Campbell. I’m still waiting to see if they can find me a publisher.

Would you rather have a book deal? Yes, but only because I didn’t understand self-publishing very well when I undertook it. The book has never received fewer than four stars on Amazon, but I still feel that I could be doing more.

What would you do differently now? I would pay someone to edit my book. It’s fine letting people do it for you as a favour, but their own job is always going to be their priority. I would also have a bigger and better launch party and get a PR person in sooner.

Finally, what’s next for Emily Knight? I’ve already written the second book about her adventures and am currently writing the third. Meanwhile, I’m working on a blog for Emily’s young fans. Over the month of August, I’ll be releasing a short story in four parts. It features some of the characters from the books.

To buy the book