Author Sue Welfare turned down a deal from a large publishing firm to try her hand at indie publishing – and she has never looked back. 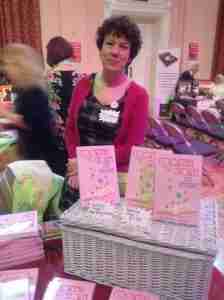 What made you decide to self-publish? Four or five years ago advances from mainstream publishers started to go further and further down. Even people making a good living from writing were being offered a pittance. I was offered a deal that I wasn’t happy with and decided to go independent and see what happened. I self-published my novel Cooking Up a Storm in 2013, and re-edited and commissioned new covers for some of my old books to bring them up to date. As a result of doing this, I’ve made considerably more money. To give an example, when I was with a publishing house I was initially given 10% of the cover price for Kindle sales, which later rose to 25%. By selling independently through Amazon, I take home 70% of my royalties. 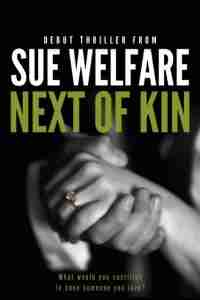 The thriller that Sue Welfare was desperate to write

Indie publishing gives me the freedom to write what I want

What have the other advantages been? Definitely the freedom. I desperately wanted to write a thriller for years but my publishing company wouldn’t let me step out of my mould – it wanted more of the same. Being self-published means I can write what I want and I brought out a thriller, Next of Kin, earlier this year. It has had good reviews and people seem to find it very satisfying. I joke that I’ve gone from kissing to killing! With a publishing company, I was also subject to having the titles of my books changed and had to put up with peculiar edits. One of my cover designs featured strawberries and champagne, which did not crop up anywhere in my novel. When I brought this up, I was politely asked to put them in! Also, it’s been good to take control of my marketing. It’s no secret that a lot of mainstream publishers do little on the marketing front these days. The only thing I miss is not having a deadline.

What advice would you give to writers planning to self-publish? I would advise anyone to go down the self-publishing route with one caveat: do it professionally. Invest in editors and designers and don’t just give it to family members to read, as they will tell you it’s great. If you’re not sure, you can hire a professional to give you their honest opinion or find a dozen people through Facebook who will offer to read your manuscript. If you want to sell in the current market you also need to be aware of what is already selling. I teach workshops for writers and I often tell them that Jane Austen and Charles Dickens would not get book deals if they were trying to publish today. Go on Amazon and look at the top 20 books in your genre. You can allow this to inform your work without slavishly copying.

Build a relationship with your readers

Any marketing tips? If I had a big budget this is what I’d spend it on. Marketing is the heavy lifting part of being a self-published author and I do this constantly alongside my writing. It’s all about forming a relationship with your readers. I take part in blog tours, use social media, run competitions and write press releases, which I sent out to local newspapers and radio stations. Luckily, I haven’t got to the stage of walking around with a sandwich board, but I haven’t ruled that out! I also plant seeds in my readers’ minds long before my latest book is going to come out. For instance, I might do a cover reveal to let people know that the novel is nearly ready. It’s a bit like being pregnant!

Aside from your erotic fiction, you’ve written under two different pseudonyms, Kate Lawson and Gemma Fox, why is that? Again, that was a marketing strategy adopted by my publishing company. It’s all to do with studies that revealed that when people are browsing in a book shop they tend to look at the D to M section. I started using the name Gemma Fox and that wasn’t deemed to work so the name was changed to Kate Lawson. Now that people browse on the internet more than in shops, the first letter of your surname doesn’t matter so much. All my self-published work is under my real name.