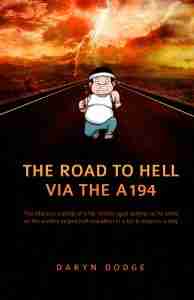 My book began as a humorous talk, in which I recounted how I went from fat to fit after being diagnosed with Type 2 diabetes. After coming to terms with the fact I was a UFO (Unfit, Fat and Old), I signed up for the Great North Run, which, if I’m honest, was mainly to impress the new woman in my life!

At one of these talks, at a comedy evening to raise money for a hospice in Plymouth, the other guy pulled out and I ended up giving a two-hour performance. It went so well that I decided to put my story down on paper and become an author.

After completing my manuscript, I got publishing quotes from two companies, including Wrate’s Editing Services. I decided to work with Danielle because she really got my book and my reasons for publishing. The other company kept talking about how I could use the book to promote my business, which was never my intention.

Danielle personally worked on the editing side, starting with a structural edit that helped me shape the final manuscript, which was followed by a full copy edit and several proofreads. She also oversaw the rest of the process, including the interior and exterior layout, and she uploaded the book onto Amazon. As someone who has never published anything before, I really appreciated the handholding, which took the stress out of the whole process.

Once the book had been published, Danielle wrote a press release for me and was able to secure coverage on a major sports website and in a national magazine. My book has received a fantastic response from everyone who has read it so far, and I’ll definitely work with Danielle again. For a novice like me, she made the whole process really easy, with great results.