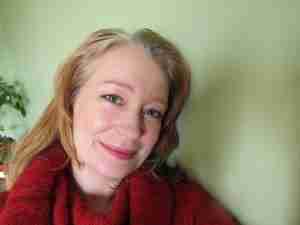 Writing a book was a dream come true for Barbara…

When journalist Barbara Copperthwaite decided to write a book, she entered the most challenging, and exciting, phase of her career. Here, she describes the highs and lows of self-publishing her resulting novel, a psychological thriller called Invisible.

Naively, it was the challenge that initially attracted me. Was I actually capable of writing a book? I’d been a journalist for eighteen years and although I knew about writing, structure, themes, pace…well, when I thought about doing it on a grand scale rather than a 2000-word feature, suddenly it seemed impossible.

I’d had an idea though. One that refused to be ignored.

Challenge accepted, the next problem was time. When the heck would I squeeze in writing a book when I had a stressful full-time job? I bought a cheap laptop and tapped away during every lunch hour.  Soon I had the bare bones of an outline for the entire book.

And so, my psychological crime thriller, Invisible, was born. It may be unusual but I decided on the title early on. I knew it was vitally important to get right as a bad title can put people off. Naming it also helped consolidate in my own head what the theme of the book would be:  the twisted journey of a woman who starts out feeling ignored and unnoticed in her own marriage and friendships and later becomes the invisible victim of a series of horrific crimes; someone everyone sees but no one cares about. 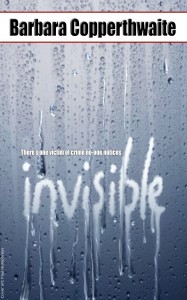 ‘I typed “The End” after eighteen long months’

Research was courtesy of a former neighbour who was a police sergeant. Between her and a lawyer she put me in touch with (plus Google), I got by. I didn’t bother with writing forums. I know this may draw shocked gasps, but I was so certain of my idea that, right or wrong, I felt other people would simply confuse me.

When I typed ‘The End’, after eighteen long months, I was alone and felt tremendously excited but also very sad. Challenge complete; now what? Umm, editing! Years of editing other people’s copy meant that I did a decent job, but most people should definitely employ someone for the mammoth task.

Then I contacted agent after agent. Though rejected by them all, the vast majority went to the trouble of saying they had enjoyed Invisible; that it was well-written, different, imaginative…it just didn’t fit in with what they were looking for right now. I could have got hung up on the rejection but instead, I took it as a great sign. The experts liked it, I liked it – if I published, hopefully, others would like it…

I’d read about self-publishing from magazine articles. I chose Amazon as it cost nothing and has global reach. There was just one teensy problem – I needed a cover. Good job I live with a professional artist! He wanted ideas from me though, and suddenly I found myself with the unexpected role of creative designer. We both knew it had to be right, as people DO judge a book by its cover, and I loved the end result.

The actual act of self-publishing was surprisingly simple – and I’m a technophobe. So, my book was on sale! Job done! Oh, how naïve… Once I’d exhausted friends and family, how was I going to generate sales? After the initial buzz, I didn’t get a single purchase for an entire fortnight. Social media seemed key. Suddenly, I found myself going from fully paid-up member of the ‘social media is tosh’ brigade to actually doing a course on online marketing, and joining Twitter and Facebook. I even created my own website, knowing that the more chances I gave people to learn about me and my book, the better chance I had of increasing sales. 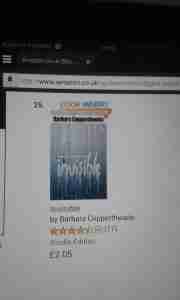 It was a fast and frankly scary learning curve. Seeing sales climb made it all worthwhile though. And the first time I entered the Bestsellers list… Put it this way, I thought I might explode with happiness.

Reviews started coming in on Amazon too. Apart from one person who gave it one star (one star! That seemed so harsh, but luckily my years as a journalist once again came in handy. I was used to my writing being judged, used to extreme reactions of love and hate, so it helped me keep perspective. Although that didn’t stop me spending a day muttering: “One star?!” to myself) the resounding consensus was that Invisible is a top-notch, five-star read.

Lots of people started saying they would prefer a physical book to an ebook though, so I researched Amazon’s CreateSpace. They print each copy of the book on-demand, so there’s no stockpile of books growing dusty; and production costs are taken from the price of each book sold, so there are no up-front charges either. But an author will probably only make 10p or so per paperback sold, so don’t plan on retiring on the profits.

Formatting for a physical book is also more complicated than for ebooks. I’d stare at books on my shelves, trying to work out font type, font size, and whether I should go for white or cream paper. I knew that if I got it right no one would notice, but if I chose wrong it would be glaringly obvious. When I got my copy though, and nestled it between Jane Austen and Stuart MacBride on my bookshelf, I really felt like a ‘proper’ author.

Self-publishing is not an easy option or vanity exercise. It is hard work. You must become an expert in fields that may previously have held no interest for you. You are not simply an author, you are cover designer, typesetter, marketing expert, social media whizz, blogger…the list is endless. I work 12-hour days, six or even seven days a week, and am frequently exhausted – and skint.

When I took on that initial challenge to write a book I had no idea of the hard slog ahead of me. Is it really worth it? Oh my, yes. 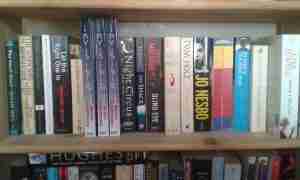 To buy a copy of Barbara’s book, Invisible