There’s no doubt that our life experiences influence what we end up writing about, but sometimes it can be years before we notice the connection.

I was reminded of a past endeavour that may have unwittingly pointed me in the direction of certain editorial subjects whilst reading about the plight of the Arctic 30. This group of Greenpeace activists and journalists, from across the globe, are currently holed up in a bleak detention centre in Murmansk, northwest Russia, on charges of piracy. (UPDATE: since writing this blog, the Greenpeace Arctic 30 have been released without charge). They were apprehended on Greenpeace’s ship, the Arctic Sunrise, in September whilst protesting against Russian plans to drill for oil in this polar region.

Back when I was a teenager, my mum Valerie joined our local Greenpeace group and became an activist of sorts herself. Her tenaciousness knew no bounds and she soon had my brother and me – and all our friends – involved in raising awareness about mankind’s destructive treatment of our precious planet. She even managed to get  one my brother’s 21-year-old mates to dress up as a mermaid for a fundraiser, something that I’m sure he’s still living down to this day. I can sympathise with him. She persuaded me to dress up in a penguin suit and waddle through the town centre collecting signatures against plans to drill for oil in the Antarctica (sound familiar?). But my loss of street cred was (albeit in a very small way) Greenpeace’s gain. That campaign was a success and to this day, the Antarctic remains is no-go area for oil hunters.

I really admire the Arctic 30, a group of individuals who were prepared to risk more than embarrassment to try and stop something going ahead that will benefit a small minority at a devastating cost to us all, and our future generations. I’m still a supporter of Greenpeace, if somewhat of a back-seat one these days. But as I thought back to my brief time as a proactive volunteer, I realised how it has influenced the work I’ve done in recent years. I’ve written several features about people whose lives were changed forever by the Chernobyl disaster in 1986, delving into the cost of environmental damage just as I did all those years ago in penguin costume. As writers, we’re always told that we should write what we know, but it’s also good to put pen to paper about things we feel strongly about. The sheer bravery of the Arctic 30 have inspired me to try and do that more…and I truly hope they get to go home soon. 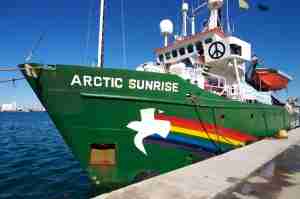